It feels like we are in Jurassic Park!  The ‘dragons’ here grow to an impressive size of ten feet and 150 pounds. It can sprint up to 20 mph, climb trees, dive to a depth of 15 feet and devour a deer in short order. Komodo, where the dragons live, is also a region in the Indonesian archipelago that consists of some 30 arid volcanic islands. Most are uninhabited, as a matter of fact only about 4000 people call the Komodo Islands 'home'. Today, most of the islands, associated reefs and bays are part of a large National Park, which is listed at UNESCO as a World Heritage Site.

This is a spectacular area; made up of aquamarine tropical waters that are so clear one can see the sea floor seventy feet down,  dry volcanic islands that are mostly inhabited by dragons, deer, wild boar, Eagles, flying foxes, monkeys and, yes, snakes (including the Cobra) and colorful reefs that make this a scuba divers dream. With that, however, comes a continuous traffic of dive boats. Since many of the best anchorage spots are now off limits to dropping an anchor the only remaining option is being lucky enough to pick up one of the very few permanent moorings that the World Wildlife Fund installed. The area desperately needs more moorings to accommodate the visitations to this incredible park.


Our first few days and night in the Park were spent in a bay named Teluk Batu Montjo, which is on the northwest tip of Komodo Island. It was a spectacular spot, clear water, no dive boats and a sunset view.  We had the place to ourselves for three days, a big change from villages full of children and the tourist crowds of Gili Aer and Bali.
﻿﻿﻿﻿﻿﻿﻿


Looking west towards the setting sun is the island volcano, Sangeang. It is an active volcano continuously venting steam from its top and it sports the textbook volcano shape, a cone rising out of the deep blue tropical ocean. Looking from Teluk Batu Montjo the sun sets just off the steaming volcano's southern slopes, an incredible sight for our ritual sundowner hour. Teluk Batu Montjo bay teams with colorful reef fish and in the early mornings we were rewarded with the sight of a handful of gracefully 'flying' Manta Rays in the clear waters around Katmai.


Gili Lawa Laut, our next stop, is a small island on the north eastern tip of Komodo Islands. A favorite stop for dive boats, so we counted our luck as we entered the bay and one of the three moorings was just being vacated by a dive boat. We spent four heavenly days there, swimming, reading, hiking up the islands crest-line and yes more sunsets.


The dive boats and their western passengers of course attracts also local boat merchants selling woodcarvings of dragons, pearl neckless', Dragon teeth, decorated wooden bowls, etc. These local merchants pull alongside visiting boats with their long and narrow beam, locally built boats. These boats are built of solid teak timbers and sport a very small diesel engine that goes put, put, put....and is started with a hand crank, no electric anything on these boats! One of these merchants, Eggj and his brother Iwan, approached Katmai shortly after we picked up the mooring and we bought a few things from them. Our interaction with Eggj and Iwan was, I hope, beneficial for all of us. One morning I asked Eggj if he could get us a nice fresh fish? He asked "how big"? I said "about this long".
An hour later he came back with a beautiful fresh whole Emperor fish. He must have bought it from one of the local fishermen, who we see in their small dugout canoes fishing the reefs all night long, as there is no village in the area. That was one tasty fish for us that evening and the next.

Egj and Iwan now have become our local 'support'. They followed us all the way to the town of Labuan Bajo on the island of Flores. We just got our anchor down near Labuan Bajo when they motored up to Katmai. While still in Gilli Lawa Laut they asked if we might need diesel on our arrival in Labuan Bajo, I confirmed that we did. That is all it took, they were not going to miss that opportunity.  It was a great benefit to us is that they deliver the fuel in jerry cans to our boat at anchor and we don't need to haul the diesel to the boat in our dingy, or even worse tie up to a commercial dock and deal with significant time and paperwork. Sweet! Within a few hours our diesel tanks were full! We then made arrangements with Egj and Iwan for a water taxi ride on their boat for early the next morning. We needed to do a shopping spree to resupply Katmai's food stores. In the morning Iwan guided us through town to a local market, where he helped us communicate with the market staff, insuring we got the right change back and organizing a taxi back to the harbor for us and all our bags of food and a case of beer. In the meantime Egj got our laundry to someone for washing. After the shopping, Laurie and I walked for a couple of hours through town on our own. It is a different world!
﻿ 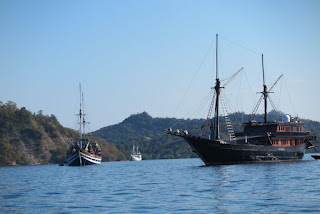 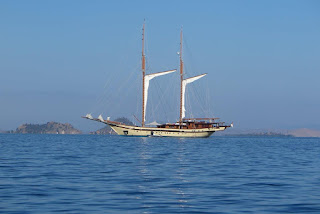 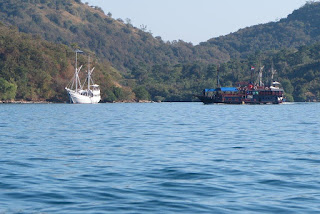 Labuan Bajo, is the biggest town in western Flores and the main hub, is a jumping off point for tourists visiting the Komodo National Park, its Dragons and its spectacular reefs. Bajo, as the locals call it, is a small town, with a few streets, no stop lights, a tourist Main Street of dive shops and a few restaurants. It is a town with apparent poverty, despite being the center for the Komodo tourist industry. Based on things now in ruin, the town has seen days of greater affluence in its past. The people on the other hand are lovely! Big smiles are common and so are friendly greetings.
We bought a papaya from a few women sitting on the ground selling veggies and fruit displayed out on some cloth. They did not speak English and we do not understand much Bahasa Indonesian, so the ensuing communication regarding the price of the papaya ended in much hearty laughter and many smiles. We understood 50,000Rp (5$), which is way too much, but they were really only asking 15,000Rp (1.5$), which more than fair for this large and beautiful papaya. Isn't it always so? It is the people who make the place. 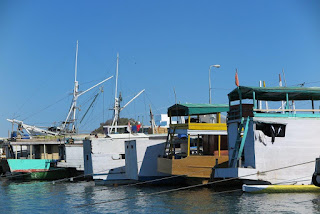 The harbor of Labuan Bajo makes you feel like it you have been transported back to the late 1800s.  Based on the multitude of very large wooden sailing ships it surely does not feel like it could be the 21st century. The harbor is full of wooden ships of all shapes and sizes, most come with some sort of sailing rig, many are schooners, some are... well I am not sure what, but they are all unusual and interesting. Many are small and some are very big and look like could ply the world’s oceans with the best of Walt Disney's pirates. But then, the 21st century is never that far away as this evening a modern super yacht arrived and anchored in the midst of the 'pirate' ships.
Posted by s/v Katmai at 9:54 AM

enter your email below to receive notice of updates