The evening of our arrival day, the Fremantle to Bali Rally together with the Indonesian Ministry of Tourism, organized an incredible evening of traditional dance, music, food and speeches, for all the rally participants. The event was held at one of Bali's grand hotels on the beach. As tired as Laurie and I were, we had a fabulous evening along with the two-hundred and some other rally participants, including family and friends who flew from Australia to Bali for this reception. All yacht owners and crew were called up to the stage for a special recognition. Laurie and I made that trip to the stage twice, the second time in recognition of being the only short-handed rally yacht, meaning only two of us on board.  It was very nice of our Australia friends to do that.


Indonesia is a cruising paradise, but the paperwork remains politely said 'difficult'.   There were problems with our cruising permit that required time to sort out before we could depart Benoa Harbor in Bali. We finally did get our entry papers after three days of non-stop pressing our 'agent' .  In the end he came through. Yes, 'agent' - most yachts hire an agent to deal with the Indonesian clearing in and clearing out procedures.
The next day our Perth friends Dave and Ange arrived in Bali by plane. We planned to spend the next ten days sailing east to Sumbawa in their company. The best laid plans sometimes need a big dose of flexibility. Since our clearance papers were not ready, we instead hired a driver to show us the country side of Bali and we spent three lovely nights in a hotel, with 'endless showers' and cool rooms. Ahhh, how you learn to appreciate a long cool shower in the tropical heat when you live on a boat where fresh water is a very precious resource.
This is my first time in Bali and Laurie's second time. Bali seems very crowded. Even in the countryside you feel crowded, though it is beautiful, volcanoes, terraced rice paddies on steep slopes and interesting villages and Hindu temples. It is also, it appears, where to world merchants come to buy all the Indonesian crafts we see in stores like 'Pier One', etc. Each village, and there is no noticeable demarcation between them, has a specialty craft. It maybe wood carvings, or yard statues carved from stone, or baskets, or gold and silver items, or batik...etc. In a yard statue village for instance, you will find small shop after small shop, an endless number of them, selling nothing but stone statues for yards. Apparently all these Balinese villages attract artisans from all over Indonesia to make and sell their craft items to world merchants and some tourists.
﻿﻿﻿﻿﻿﻿﻿
﻿﻿﻿﻿﻿﻿﻿
The terraced rice fields of Tegalalang are world famous.  Lovely views were enjoyed from a café on the rim of the valley. 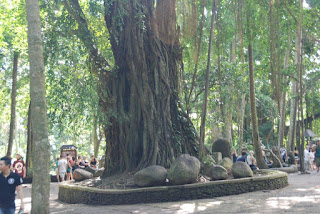 Near the village of Ubud, Bali there is a monkey forest that has many cheeky little long-tailed macaques.  Our driver wisely advised us not to feed the monkeys as they can get aggressive.  We saw several tourists dealing with the aggressive ones as they tried to grab bags and even sunglasses.  Of course, there are stands that sell bananas as well as a first aid station.  Go figure.  It was beautiful, green and lush in the forest.﻿﻿﻿﻿﻿﻿﻿﻿﻿﻿﻿﻿
﻿
Well on our third day in Bali we finally received our Indonesian clearance papers. They even included Laurie as crew on Katmai! Oh yes, all the other people originally erroneously listed on our permit as crew are still there. In the meantime we figured out that these additional people on our permit are the crew of the sailboat a different yacht in the rally. Apparently a cut and paste error by the agent when he submitted our cruising permit request to the Indonesian government last April.
Now with full tanks of diesel, water, and our food stocks resupplied, Dave and Angie on board we set off to the east for the nearby island of Lembongan on 3 June.

enter your email below to receive notice of updates