About the Yacht Katmai, a Bénéteau First 51


History
Designed by German Frers, the 51' foot sailing sloop "Katmai" was build in France at Beneteau's custom yard in 1987.  The next year her sister ship, La Poste, competed in the around the world Whitbread Race.
Katmai was originally known as "Decisions" and then "Nitemare".  During this time in the early 1990's she had a long competitive run as a racer on the Great Lakes and was stationed in Chicago and Milwaukee.
In 1999 she was purchased by a family from the USA pacific northwest (mom, dad and 3 teenagers) who refitted her for cruising and departed the west coast of the USA for 3 years of sailing in tropical Pacific.  On their way back to Seattle in 2001 they decided to sell the yacht, which they had renamed "Kookaburra".  We met them in Tahiti and agreed to purchase the yacht on their return to Seattle in August 2001.
After acquiring the yacht, we sailed her north to our home port of Seward Alaska  during June 2002.  She resided in Seward and we cruised the beautiful fjords until June 2007.
Work took us to Perth Australia for fiveyears during the mid 2000's.    We were fortunate that Katmai was able to join us when friends agreed to deliver her /cruise to Australia from Alaska.  After a multi year refit, another oversea assignment, we have now retired and live on and cruise Katmai, based out of the Fremantle Sailing Club in western Australia.
Hull Drawings and Layout 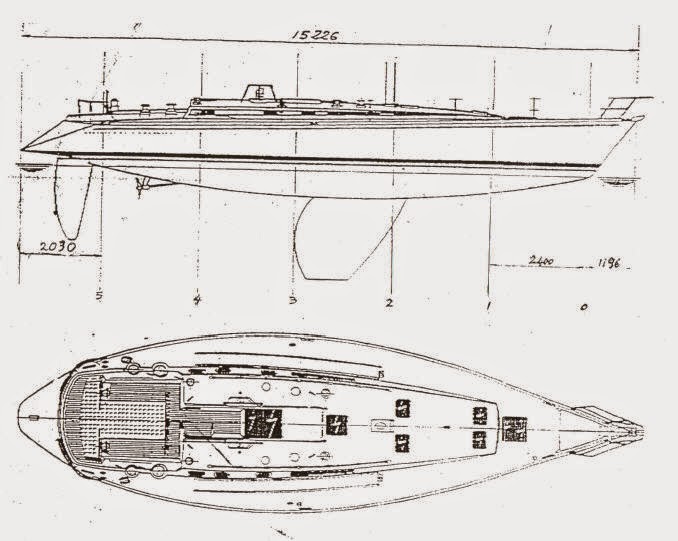 The
Comments By German Frers, the designer of the yacht


"In the design brief for the First 51, Bénéteau set a deceptively simple but in fact truly demanding task. I was to design for them a yacht of both performance and elegance - but also of doing well under IOR. So I went to the lines plans and proven racing results of some of my latest race boat designs - Fujimo, Nitissima and Morning Star. I had as well the technical know-how, high technology and feel for performance developed in the Bénéteau yard and demonstrated so brilliantly in boats such as "Phoenix" during the last Admirals Cup.


The First 51 will be campaigned next season on some of the world's most demanding race circuits: SORC, Admirals Cup and Sardinia Cup.  For top racing she has been designed to have partly removable accommodations to make her a very competitive racer-cruiser. First 51 will be marketed principally as a racer-cruiser and will offer a level of comfort and luxury rarely seen in a performance boat. Designing the First 51 has given me enormous pleasure. She is undoubtedly the yacht which most closely reflects my own firmly held views on what the sailing yacht of today should be."
German Frers, Washington, September 1985