One of the most pleasurable things about our voyage through eastern Indonesia has been meeting the people.  The children  are especially delightful, and invariably run for their dugout canoes and paddle out to us as soon as they see us setting the anchor....as they approach, they smile, and wave and yell "Hey Mister, Hello Mister".  It is tradition for traveling sailors to bring small gifts for the local children, and we brought along a lot of school supplies, note books, pencils, pens.  Generally it is just the local boys that show up, but sometimes girls as well.

Often, a local boy will paddle out with some fruit or drinking coconuts to trade for some perceived treasure on board Katmai.  We have traded everything from fishing lures, fishing hooks, clothing and cash (if they prefer) for what they bring, if we can use it and generally we can.

﻿
﻿Thanks to the generosity of the Fremantle Sailing Club and their donors, we also had several duffle bags of hats, shirts, and shorts sized for children.  In addition, the large bag of used soccer balls (footballs) have been a big hit.  Generally when we gave away a football,  the children played for hours on the beach. 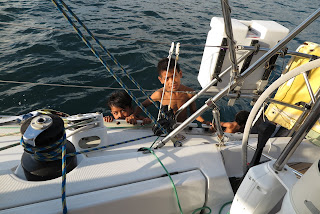 Peeking over the side of Katmai,
standing in their canoe