Type of Sailing We All Dream About


Sailing at last -  Fremantle to Bunbury!
We departed the Fremantle Sailing Club (FSC) harbor before dawn on New Year’s day for the 35 mile sail south to Mandurah.  We departed at 5 am to catch the morning easterly winds.  The east wind was predicted to shift to the south at noon, and it did.  It was just a fantastic, ideal day of sailing and we arrived Mandurah midday.  By evening several other FSC boats joined us in the anchorage. We were part of the group heading south during the holiday season. 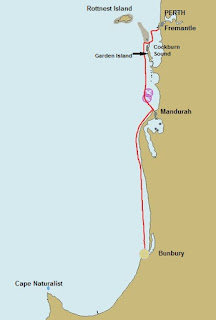 With several mornings of lovely easterly winds forecast, it was an excellent time to go south.  The predominate summer wind pattern here is easterly winds in the morning, and southerly ‘sea breeze’ winds in the afternoon and evenings.  The southerlies can be quite strong, more of a gale than a breeze at times.  Regardless of strength, wind from the south makes it difficult to sail south, and certainly uncomfortable as the seas tend to be rather lumpy along the coast when the south wind blows!


Cockburn sound is the body of water just outside of the harbor, and it is quite shallow, so Katmai must use the channel that is dredged for cargo ships for at least part of the way.  You can see our zigzag in the first part of the trip as we sail out of the harbor.  Once we rounded the north end of Garden Island, it was a lovely beam reach between the two reef complexes until it was time to make the turn in to Mandurah and anchor off of Robert Point.  It is fantastic to sail as the sunrises; it is so peaceful.

That evening at anchor was just fantastic with a light breeze to cool us off from the days' heat, and a nice sunset with fishers and walkers silhouetted on the beach.

Mandurah to Bunbury
The next morning, January 2nd, we again departed before sunrise, about 4:30 am with several other FSC boats.  It was a magical ride down the coast on easterly winds that ranged from 10-25 knots.  We were inside of the main reef complex called the ‘Boulevards’.

We did however keep out eye on the depth sounder at all times as we had about 20 feet under the keel the whole way.  It was once of the nicest sails we ever had, with perfect weather, incredible scenery of the sand dunes along the coast, porpoise, flat seas and turquoise blue water, friends sailing along in their boats and lovely warm light.


We arrived in Bunbury about 1 pm.  It was a lovely 50 mile sail.  There were already several FSC boats here, including ‘Divided Sky and ‘John Barley Corn’.  ﻿﻿﻿﻿
﻿ By evening, Miss Saigon, Koniara, Pegasus II, Eucalypt and Celeste were all anchored and we did what cruising sailors all over the world do….we took our tender inflatables to shore and shared a few drinks and appetizers and enjoyed the lovely company of friends both old and new.
We plan on staying here for two nights and then returning to Fremantle on Wednesday.  It will give some time to fish and crab and perhaps take a swim!
Posted by s/v Katmai at 11:06 AM