Back in the Pen (Slip) with Wild Weather 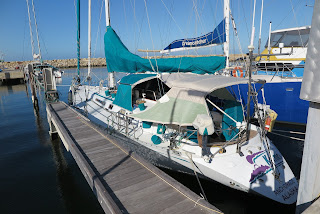 Katmai went back in to the water on schedule just before Christmas and boy were we glad.  The Christmas season brought really unusual and interesting weather to much of Australia.  We were glad to observe the weather from the comfort of our boat, in the harbor.

There were two large storm systems influenced the weather in Fremantle, even though they were relatively distant.

It was a very windy week here in the harbor, with local predictions consistently exceeded. Much of the last few days saw winds in the 20 to high 30 knot range.
The Fremantle Sailing Club Cruising section members are planning on sailing south to Quindalup for the holidays. While some boats have departed we are waiting for more favorable winds.


The following three synoptic charts from the Australia Government weather service really show the story of the unusual weather we have experienced. 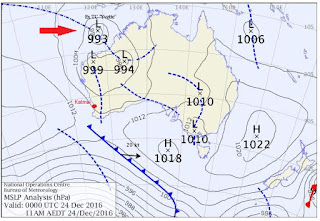 This first chart is from Christmas Eve.  I have added our position on the west coast in the Fremantle Harbor.  To the north is a cyclone, Yvette, that is headed for landfall on the northwest coast of Australia.  The continent of Australia is about the size of the lower 48 states. 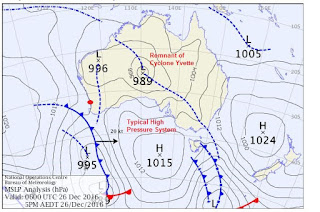 Two days later, Yvette is bringing major rains to the center of Australia, a region which is a desert.  The Uluru National Park (formerly known as Ayer's Rock) was closed due to heavy rains and flooding.  The official government word is that it was a once in 50 years' storm.  Note also the High Pressure system in the Bight of Australia.  During the Australian summer season (now), the high pressure systems move from west to east through the waters off southern Australia every 3-4 days. 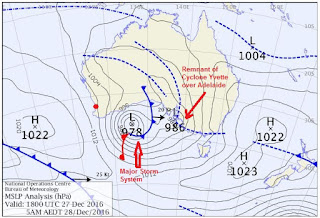 The most amazing thing happened next. Within 18 hours, a major Low Pressure system (storm) formed in the Australian bight.  As the next High pressure system (the 1022 on the Chart) tried to move in to the bight, it compressed against the big Low.  This compression is expressed as the isobar lines on the chart are close together, bringing more wind to the west coast of Australia.

It is three days later as I type this and things are improving weather-wise. The Low in the bight has moved considerably to the east and the more normal pattern of high pressure systems moving though has resumed. We plan on heading south tomorrow and hope for some nice easterly winds to ease us south.  The strong southerlies of the last week would have been right 'on the nose'.  We will be off for just a few days for local sailing/fishing and socializing with friends.
Posted by s/v Katmai at 9:24 AM