We sailed the 290 miles between Carnarvon and Geraldton departing early morning Monday 24 August and arriving Geraldton after dark, about 8 pm on 26th of August.


We stopped the first night on the passage, after sailing only 50 miles, at the northern tip of Dirk Hartog Island and picked up the mooring in Turtle Bay for the night and to wait for the weather (winds) to moderate as forecast.  Dirk Hartog Island is the western most point of land in Australia, and a place of great historic significance as well as a place of great natural beauty.  This is definitely a place we want to visit again.
A place in history was sealed in the year 1616 when the island was discovered by captain Dirk Hartog of the Dutch East India Company ship Eendrach. The names of senior people on board, including Hartog's were inscribed with the date on a pewter plate and nailed to a post as he claimed the land for the Dutch.  He was only the first of many early explorers to visit the prominent land mark on the western coast of Australia.


We arrived at Turtle Bay early, about 3:00 pm after an ideal sail across Shark Bay.  Shark Bay is more than 5 million acres and a UNESCO World Heritage Site and home to seemingly boundless wildlife plus the world’s largest beds of sea grass.  It is a relatively shallow, huge bay, a popular tourist destination as well as a destination for humpback whales and the world’s largest concentration of dugongs, (manatees).  Without exaggeration, whales were in constant sight the whole 50 miles as we crossed the Bay from northeast to southeast.
﻿
Frankly it was unbelievable to see that many whales all around us.  What a memorable experience.  It was also great sailing weather, with temperatures in the 70’s (F) and 15-25 knots behind the beam.
The abundance of humpback whales prompted us to pull out our small hydrophone to see if we could hear them sing.  Wow, were we glad we did.  We even recorded some of their vocalizations simply by holding the Ipad to the stereo speaker.  The hydrophone is a small unit originally marketed for kayakers.  It runs on a 9 volt battery, and has a 3.5 mm output jack that we plug in to the auxiliary input on our CD player.

Click on the white/red arrow by the whale's tail below to hear the whales we recorded.

There were so many whales, and some so close to the boat that evening, after dark in the light of the full moon, we could hear them singing without the hydrophone!  That was a first for us, as we listened to their songs reverberate through Katmai’s hull.  Truly an amazing experience.  We have seen a lot of whales during our time in Alaska, but nothing that could remotely compare to the abundance of whales here in Australia.  By some estimates, the humpback whale population is growing nearly 10 percent per year in Western Australia, and is nearly back to pre-whaling population levels.  How good is that? Fantastic and rather amazing considering the harbor we stayed in while in Carnarvon was a whaling station that took nearly 8000 humpback whales alone, and it was only one of several stations along the coast.  The whaling stopped in the 1960’s. Whaling was, by some accounts, the first viable industry in Western Australia after the arrival of Europeans. Now days of course, Australia is very focused on conservation and protection of these gorgeous giants. 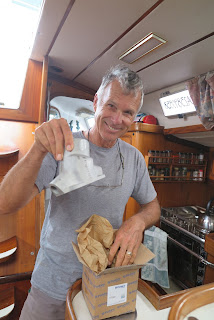 All in all, we spent 18 days in Carnarvon waiting for that engine part, and then waiting for the proper weather to head south and continue our journey to Fremantle.  Fremantle is the main harbor for Perth Australia and where we will leave Katmai while we return back to the USA. Eric is holding the long awaited elbow for the engine exhaust manifold just after its arrival from Perth via Singapore.  Yeah, right part, phew!!
Posted by s/v Katmai at 4:47 PM